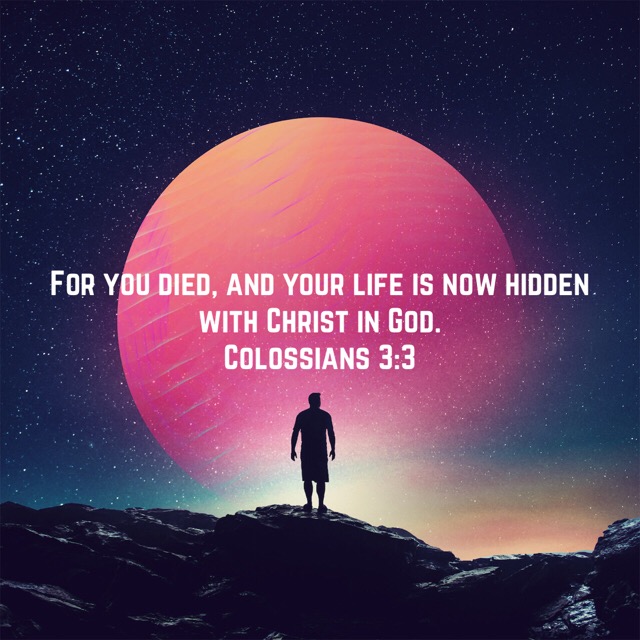 For you died, and your life is now hidden with Christ in God. Colossians 3:3

Death is something that most people do not like to talk about. They do not want to think about the fact that some day they must die. Many fear what happens after death.

For the majority of people, death is the end of the line, things are over. When a person is dead, there is nothing more that can be done. It usually brings about sadness and depression, missing the one who has died.

With the exception of a few, most people cling to life. They want to live and keep going for a long time, despite the problems in this life. Yet, there is a death that God wants every person to go through.

God wants people to die to self, sin and this temporary sinful world. Sin had brought death into this world, and it is death that can cast death and sin out of this world.

Removal of sin required a death, which is what Jesus did. Jesus died on the cross to remove sin and death from the lives of all people. He did the work of dying, now every believer needs to follow Jesus in His death. They must also die to sin and self.

Paul said that the believer has died and that his life is now found in Jesus. This death is not the physical death that the world knows of, but death to self and sin. It is getting rid of sinful habits. It is dying to the old way of living in sin.

Allow yourself to die to the old self and sin. Allow Jesus to live in and through you. As a dead person, allow God to move you in what needs to be done and how to do it.

Now that you have died, the world and sin no longer has any control over you. You are a new person found in Jesus. It is Christ who is living in and through you.

You have a new life, live the life God has for you.

And he died for all, that those who live should no longer live for themselves but for him who died for them and was raised again.” 2 Corinthians 5:15

In this world everywhere a person looks the views of most people are what is in it for themselves. Each person wants the best for his own life.

When a person goes to purchase a new car at a dealership, he is trying to get the lowest price possible. He is thinking about his own money, rather than thinking about the salesman who is trying to make a living for his own family. It is about himself, not someone else.

There are some wealthy people who give lots of money to some great organizations to help others. Although it looks good, often the purpose of giving the money is not so much to help others, but to get a tax write-off. Again, it is about self, not others.

When Jesus left the glories of heaven to come to earth it was with you and all others in mind. As He walked on this earth, He was focused on doing God’s will with you in mind. Ultimately Jesus died on the cross for you. Jesus died so that you might live.

Never once was Jesus living for Himself. His entire life on this earth was always about you and everyone else. His purpose was to save everyone.

Jesus died and rose again for you. No one can give or do for you anything more than He did. As a believer, you should live your life in the same way. You should be living to serve Jesus and others.

Die to yourself today, and live for Jesus, the One who died and rose again for you.